OPEN SECRET
The Poetry of Rumi 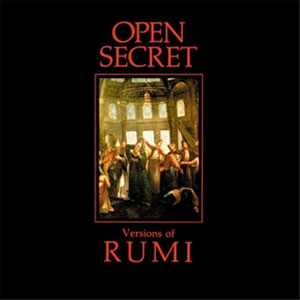 Many years ago, someone read a poem to me that pierced
my heart. It was this: "The Clear Bead at the Center changes everything. There are no edges to my loving now. I've heard it said, there's a window that opens from one mind to another.
But if there is no wall there is no window, and if there is no window, there is no need for a latch." I decided to find the author of that poem, and see if we could work together to create an audiotape of this and some of his other RUMI poems. Coleman Barks and I met and co-created the audio version of OPEN SECRET.

OPEN SECRET: The poems of the 13th Century Sufi Master Rumi, the original Whirling Dervish, read by the poet and foremost interpreter of Rumi's poetry, Coleman Barks in collaboration with Dorothy Fadiman. Original music performed on flute, violin, and tamboura is interwoven with the readings. Vocal and musical score produced by Dorothy Fadiman.

The Life of RUMI

Jalaluddin Rumi was born in Afghanistan (1207) to a family of scholars and theologians. They fled the Mongul invasions, settling in Turkey, where Rumi succeeded his father as head of the Sufi dervish learning community. The direction of his life changed dramatically when he met Shams of Tabriz, the man who became his intimate friend and inspiration. With Shams, he discovered the "Inner Friend," a way of being with God in companionship. Out of Rumi's relationship with Shams, out of his love-joy-longing, came the poetry, the surrender that continues to ignite and unite lives and the turning (Rumi became the original "Whirling Dervish"). When Rumi died in 1273, devotees of many faiths came to his funeral. He consciously worked to dissolve the barriers between religious creeds. "I go
to the Church, the Synagogue and the Mosque...I see only one altar." He continues to be rediscovered by sympathetic souls from every culture.