SEEDS of HOPE
Meeting the Challenges
of HIV/AIDS in Ethiopia 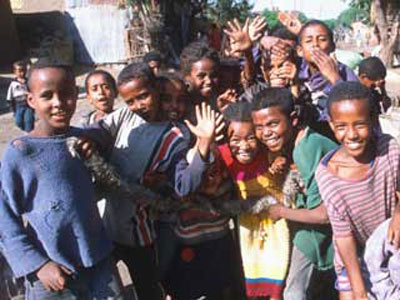 All of the films are available in English and Amharic
Website: SeedsofHopeFilms.org
Amharic Webpage: የተስፋ ዘር

SEEDS of HOPE is a series of five documentary films about individuals and organizations working to break the silence, lift the stigma and prevent the spread of HIV/AIDS in Ethiopia. In each film, we meet activists, family members, humanitarian groups, and health care professionals, all acting as advocates for greater awareness. Each film conveys a message of empowerment and hope.

Goal for the Series

Our mission with these films is to take viewers well beyond the stereotypical images of AIDS in Africa. By documenting intimate moments in the day to day lives of people living with HIV - orphans being raised by neighbors,family members and in orphanages; young people who use performance and poetry to educate their peers; sex workers who teach their clients about condom use, and professional caregivers working side by side with those who volunteer their time.

We hope to inspire Ethiopians and others around the world to get involved in HIV/AIDS prevention and take part in the struggle for social justice and human dignity.

A compilation set of the five films was distributed throughout Ethiopia to more than 200 nonprofit and neighborhood groups, which will use the films in their work to raise awareness and mobilize involvement in HIV prevention and care.

A DVD that includes the five films is being distributed to Ethiopian community groups and HIV/AIDS prevention initiatives across North America. Research shows that African immigrants are at high risk for HIV/AIDS, and yet few prevention programs are tailoring their outreach to reach these communities. Outreach to Ethiopian associations, public access television stations, and health providers throughout the Diaspora is supporting the use of the films as educational and advocacy tools.

Making of the Series

Producing these films about HIV/AIDS
in Ethiopia was inspired by my work on an earlier film, WOMAN by WOMAN, a film on women's rights in India.

Working on that film awakened me
to the challenges women face in developing countries. I was approached by the Executive Producer of WOMAN by WOMAN, and asked if I was open
to making a film about the spread
of HIV/AIDS in Africa, a disease
which was disproportionately
impacting women. I said, "Yes"
without hesitation.

As I began to do background research, I met Amy Hill, who expressed an interest in working with me. Together, we discovered that one of the most devastating aspects of the AIDS epidemic in Africa was the silence. HIV positive people, frightened of rejection and even physical abuse, would often hide their status completely or simply stay indoors. We decided to produce five films, which document the toll of silence and the importance of speaking out. Originally, we planned to make one film. As the project evolved, it became a quintet of five individual documentaries, each presenting issues from different points of view.